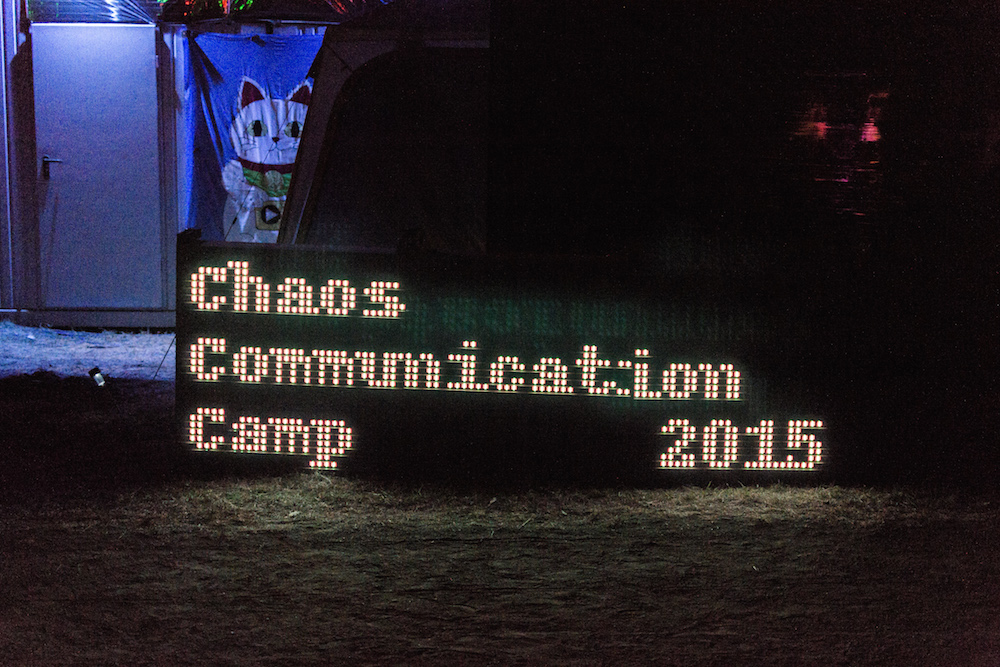 Take a couple gigabits of good internet, add as many LEDs as you can and combine it with some of the most creative people in the world. Digest it for a while and you'll start to get an idea of what the camp really is: an amazing countryside experience that makes you say "wow, I never thought that was possible" over and over again.

Organized by the Chaos Computer Club, the Chaos Communication Camp is a 5 day camping event for hackers and like-minded people that takes place every four years in the proximity to Berlin. I got the chance of attending the 2015 edition.

The event is exactly what you think: people take their tents and go to a camping site.
The only difference is that this time there's hundreds of ethernet cables going around, sometimes even to the actual tents. People form what they call "villages", which are just bigger tents (with enough space for 10-30 people). There were different villages: some were by country (I remember from France, Belgium, Italy, Sweden and most european countries), some were for programming languages (with Ruby Berlin e.V.. I participated in the OpenCodeTown) and lots were for specific topics (like Bitcoin or even Virtual Reality Sex).
My favourite way of enjoying the camp was just going around through all the villages and talking to the people. 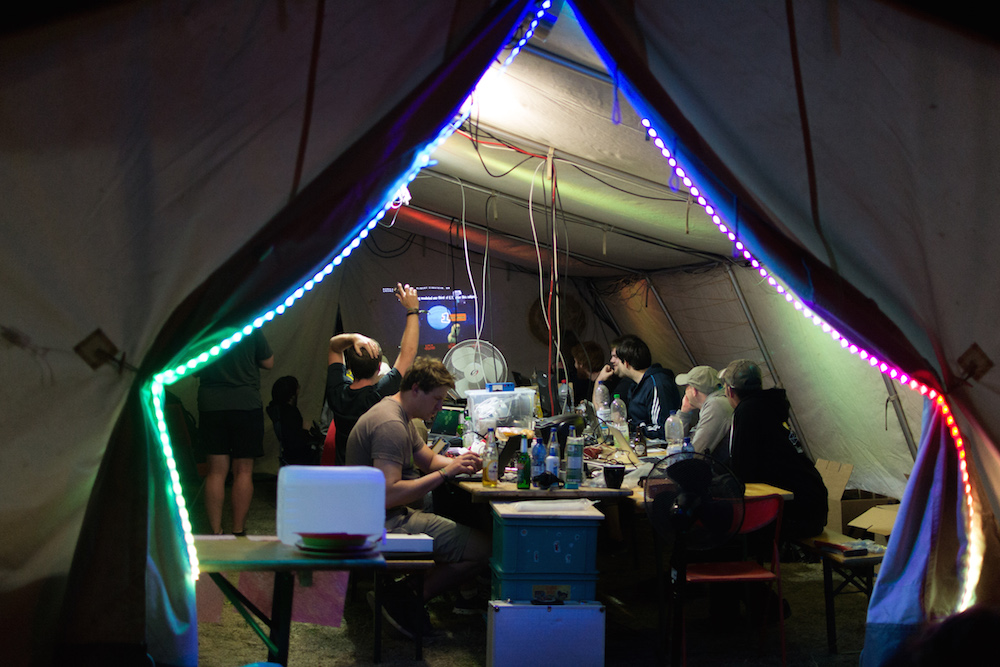 I got to learn more about bitcoin, tried an Oculus Rift (btw this is really going to be the future), learned about lucid-dreaming (and in-dream-communication with the outside world), practiced a bit of soldering and even saw a crepe-making machine.

I think that my favourite aspect of the camp was the people.
As my friend Robert mentioned it: "if you forget your laptop outside of your tent over night, next morning you'll notice that somebody went and plugged it to a power adaptor.". As the motto says, people were really excellent to each other. Everyone was super friendly (with some minor exceptions) and everyone had an amazing sharing culture that I haven't seen before: from free beer, to free food, to sharing knowledge and an overall great willingness to help you, even after just meeting you. People were really that great.

The spirit of the CCC is also very present: educating people about technology.
I liked the lockpicking workshop a lot, because you can learn how unsafe locks are. I literally opened one in my first 2 minutes of trying it. I think it's important that people learn that technologies always have vulnerabilities, so they can make better decisions.

The atmosphere was also really nice: lots of LEDs everywhere (check out the link below for pictures). People were really creative. There was a rocket (with actual smoke!) and even a TV-Tower like the one in Berlin.

They also give you a nice badge that you can hack on (you even get to assemble it yourself!). It's called the rad1o badge and it can listen from FM frequencies to GPS signals and even microwaves. It can also control LEDs, among other things. They managed to get the hardware on time with some basic software functionality: you could write your nickname and play space invaders, but the really cool thing is that people were creating software for it in the camp, as it happened. With Finn and Mariano we wrote a small program in C that interacts with the badge.

Overall the camp is something that I actually find hard to describe in words.
I think the best is just to experience it. I'd really recommend it, even for not-so-technical people.
After making it back home I perceived things somewhat differently and it took me a couple days to get back to reality. I'll probably update this post as I manage to put in words nice memories to share.

I put some pictures in my 500px account. I think they can help give a better idea of what the camp was.

My girlfriend also wrote a blogpost about it, you can check it out in her blog Malweene.